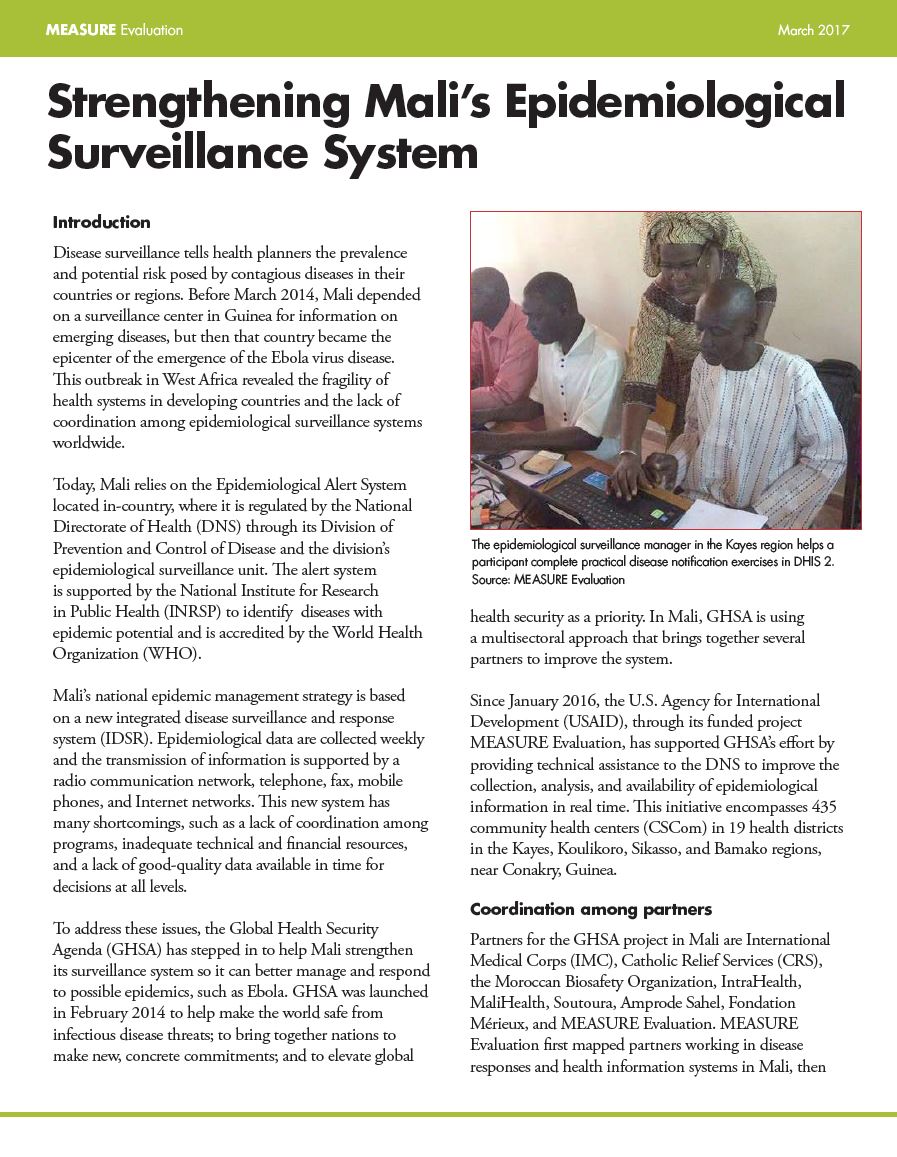 Disease surveillance tells health planners the prevalence and potential risk posed by contagious diseases in their countries or regions. Before March 2014, Mali depended on a surveillance center in Guinea for information on emerging diseases, but then that country became the epicenter of the emergence of the Ebola virus disease. This outbreak in West Africa revealed the fragility of health systems in developing countries and the lack of coordination among epidemiological surveillance systems worldwide.

Today, Mali relies on the Epidemiological Alert System located in-country, where it is regulated by the National Directorate of Health (DNS) through its Division of Prevention and Control of Disease and the divisions epidemiological surveillance unit. The alert system is supported by the National Institute for Research in Public Health (INRSP) to identify diseases with epidemic potential and is accredited by the World Health Organization (WHO).

Malis national epidemic management strategy is based on a new integrated disease surveillance and response system (IDSR). Epidemiological data are collected weekly and the transmission of information is supported by a radio communication network, telephone, fax, mobile phones, and Internet networks. This new system has many shortcomings, such as a lack of coordination among programs, inadequate technical and financial resources, and a lack of good-quality data available in time for decisions at all levels.

To address these issues, the Global Health Security Agenda (GHSA) has stepped in to help Mali strengthen its surveillance system so it can better manage and respond to possible epidemics, such as Ebola. GHSA was launched in February 2014 to help make the world safe from infectious disease threats; to bring together nations to make new, concrete commitments; and to elevate global health security as a priority. In Mali, GHSA is using a multisectoral approach that brings together several partners to improve the system.

Since January 2016, the U.S. Agency for International Development (USAID), through MEASURE Evaluation, has supported GHSAs effort by providing technical assistance to the DNS to improve the collection, analysis, and availability of epidemiological information in real time. This initiative encompasses 435 community health centers (CSCom) in 19 health districts in the Kayes, Koulikoro, Sikasso, and Bamako regions, near Conakry, Guinea.